The United States Swim School Association® began as The National Swim School Association (NSSA).  It was founded in 1988 to provide a trade association for those who operate swimming schools in the United States.  NSSA is the first association connecting swim schools. Steve Graves, then a swim school owner in FL founded NSSA preparing the bylaws, membership materials, and a newsletter for mailing in early September of 1988. By year’s end 36 schools were Charter Members. Graves led the Board of Directors as NSSA President.  In January 1989 the first of what would become regular surveys of members was conducted on business and teaching practices.

In April 1989 the first NSSA Conference was held in Fullerton, CA.  There was a tour of nearby schools one day and classroom presentations the next.  Those participating in the Fullerton conference decided to meet again in September to discuss infant-toddler aquatic programs and draft guidelines for such. The two-day event was held in Sonoma, CA and by December 1989, 60 schools had become NSSA members.  An outcome of the Sonoma event was a task force formed to prepare a NSSA Certified Infant Swim Teacher Course.  This was done and unveiled at the next annual conference.  The 2nd annual conference was held in February 1990 in Orlando, FL.  The 3-day event included domestic as well as international speakers.  At the time the NSSA Board agreed to create an international affiliate membership.  Annual awards were given to outstanding members for the first time.  The membership decided at this time to have the annual conference during the fall of each year to allow enough time to implement ideas and knowledge gained.  Another conference was held the same year in San Diego, CA initiating the cycle.

The San Diego conference included speakers from the U.S., and the international schools, and the medical field.  A tour of schools was held at the start of the event. Induction of six individuals into the newly created NSSA Swimming School Hall of Fame was made.  During 1993, NSSA secured a commercial general liability insurance program for members.  Also Jan Thomas, Board Member since 1988, became NSSA President as Steve Graves moved into full-time Executive Director Position for NSSA.  The new leadership and Board met at the start of 1994 in Salt Lake City, UT for the first of annual strategic planning meetings for the NSSA leadership.  A membership directory was first published in 1994.  Also in 1994 a special survey of parents enrolled in NSSA infant-toddler aquatic programs was conducted.  Independent researchers analyzed the questionnaire results, which garnered 1200 responses. As 1994 ended 146 American schools held NSSA membership along with 30 international schools.

In 1995, a new set of meetings began to connect members in the month of March.  A day and a half long Teaching Practices Exchange was held and preceded by a day’s discussion of school management.  Events were held in Morristown, NJ and in Las Vegas, NV.  Almost 100 owners, managers, and teachers participated.

In 1996, the four regional workshops were held for nearly two hundred participants.  In November of that same year, members met in Tempe, AZ with a record number of attending.  Along with the educational sessions, members who were former Olympic swimmers presented.  The National Spa & Pool Institute’s annual exhibit was visited in nearby Phoenix.  Four individual were inducted into the NSSA Swimming School Hall of Fame.

An Internet website for NSSA was opened in January 1997 including a directory of all members.  The 1997 Annual Conference was held in Palm Springs, CA with a focus on business development.  Martha Sue Crowley of Charlotte, NC became the NSSA President. 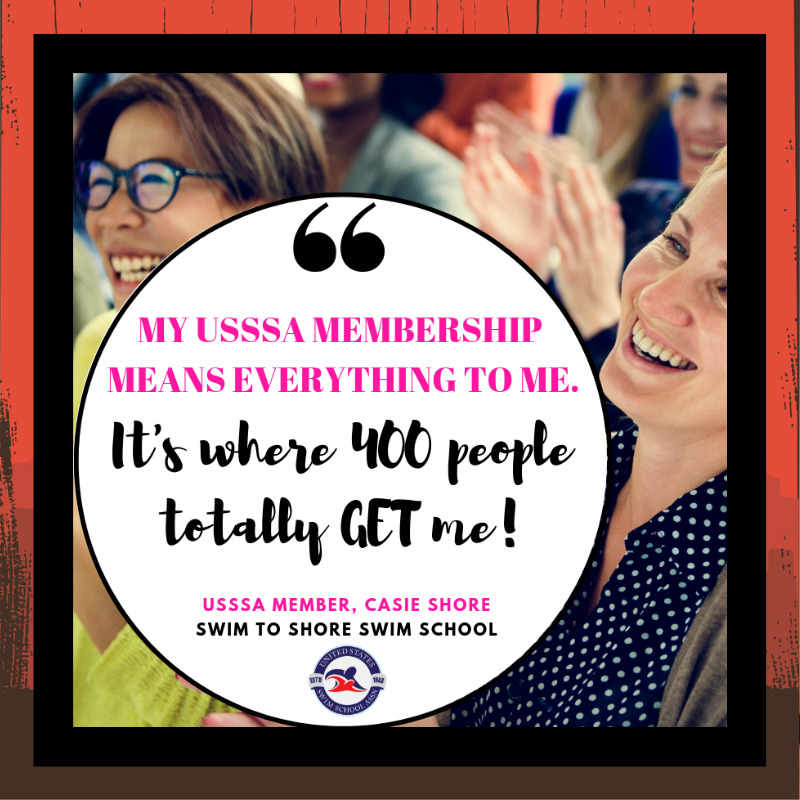